The Bill Russell 1957 Topps rookie card #77 his a very valuable and highly sought after card of one of basketball’s greatest centers. This card stands because it was Topps only basketball set of the 1950s and the first major issue set in almost a decade. The Bill Russell rookie card is the top card in this set. Even though many of the cards in this set are considered rookies, Russell was a very young player when it was printed. He went on to win 11 championships, win 5 MVP awards and become one of the biggest stars in basketball history.

The collectability of this card rose after it’s printing due to the dominance of Bill Russell and his Celtics team. Along with Wilt Chamberlain, he was considered the best big man in basketball. Bill and Wilt had legendary battles that were often won by Russell because of his much better supporting cast. With all of the success Russell had you’d expect this card to be legendary, but there are even more reasons this card is so valuable:

Other factors that make this card iconic:

This was the first Topps Basketball set and the first major basketball issue since the 1948 Bowman set. For this reason, many of the cards in the set are first cards for the players, thus considered rookie cards. Also of note, Topps did not release another basketball set until the 1969.

The 80-card set was printed on a 132 card sheet. Because of this, 49 of the cards were double printed, 31 cards were single printed, and 1 card (Bob Petit) was quadruple printed.

The set is not extremely rare, but suffered from centering problems and printing defects such as “snowy photo.” This makes centered cards with excellent color very valuable.

Design: The front of the 1957 Topps Bill Russell rookie card #77 is a very basic design that is mostly just a photo with a white border. In the photo, Bill Russell, who was a great defensive player, is guarding fellow Hall of Famer Jack Twyman. Russell is intently watching Twyman with the intent to intercept or deflect his pass attempt. You can also make out another Hall of Fame player, Russell’s teammate Arnie Risen, in the background. The bottom of the card has two boxes with text. The yellow box has the name “Bill Russell” and the red box has the team’s name “Boston Celtics.”

The back of the 1957 Topps Bill Russell rookie card #77 has a interesting design. The card number can be found in the upper left corner on a basket ball icon. The top of the card has Bill Russell’s name and team separated by an orange line. Just below the orange line is Bill’s biographical information including his age, weight, college, home and a paragraph about his Olympic and early professional accomplishments. The right side of the card has his height and a clipart graphic of a tall basketball player with white skin. It was much more common in this era for all the clipart or cartoons to sports cards to only depict white characters even on cards of black players.

After taking the top college and Olympic honors, Bill began to forge out another great career last season. As a pro, he uses his talents to block enemy shots and bottle up attacks. In the ’56-’57 Playoffs, he set a record for rebounds with 244, while averaging over 13 points per game.

Keep in mind that prices fluctuate. While PSA is a great way to find out the value of a card, we recommend going to eBay to see what cards are currently selling for on the world’s most popular auction site. Click here to view current auctions for the 1957 Bill Russell rookie card #77

The 1957 Topps #77 card is the only mainstream Bill Russell rookie card, but he does have one very scarce and obscure “card” from his college days that predates his Topps rookie. Basketball cards weren’t made consistently during this era, so we’ll also discuss a few of his other early cards:

The 1955 All-American Sports Club card is the first Bill Russell card. This was from a 500 card set that was issued as a sheet of photos that required hand cutting. The set included athletes from several different sports (baseball, golf, tennis, boxing and more). Bill Russell is included as a member of his college basketball team, the San Francisco Doms. This card predates the 1957 Topps rookie and is very scarce.

Shop this set on eBay

After Bill Russell’s 1957 Topps rookie card, his next major issue cards were in the 1961-61 Fleer set. He has two cards in this set. The first is card #38 his regular issue card.

Bill Russell’s second card in the 1961-62 Fleer set is the “Bill Russell Takes to the Air” in-action card #62. This card features a very unconventional, but cool photo of Russell flying through the air for a layup.

Bill Russell was the center and arguably the most famous member of the Boston Celtics dynasty of the late 1950s and 1960s. He was known as a great defensive center who had legendary battles against Wilt Chamberlain. Bill Russell’s offensive statistics fall short of those put up by some of his Hall of Fame contemporaries like Kareem Abdul-Jabbar and Wilt Chamberlain, but his 5 NBA MVPs and his 11 championships keep him in the discussion for greatest center and player of all time. Bill Russell won two of his 11 NBA Championships serving as a player/coach. Here are some of Bill Russell’s many accomplishments:

Get Your Bill Russell Rookie

Do you want to add a 1957 Bill Russell rookie to your collection? If so, we recommend starting your search on eBay – the world’s #1 card trading place. Even if you’re not planning to buy one just yet, it’s fun to look at all the great cards currently for sale.

Amazon.com is the world largest ecommerce market place. They have Bill Russell books, memorabilia, and so much more. See what you can find today.

Visit our Web Story, Learn all about the Bill Russell Rookie Card 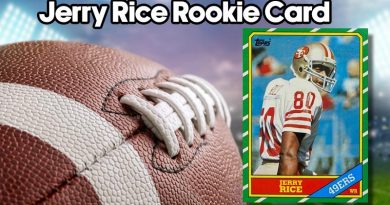 The Jerry Rice Rookie and Other Vintage Cards [infographic]