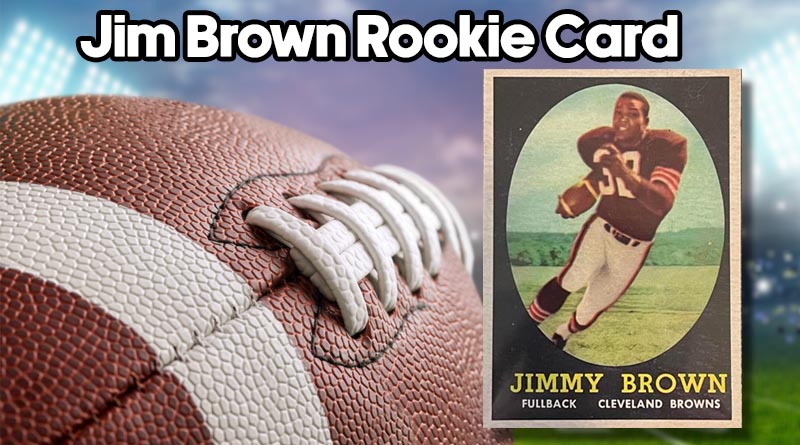 The 1958 Topps Jim Brown Rookie Card, #62, is one of the most recognizable cards in all of sports. The card features Jim Brown running in what can be described as a near-Heisman pose. The NFL doesn’t have a single player with the statue of Babe Ruth, but Jim Brown is likely the closest player football has to offer. His career was relatively short, but completely dominant. He led the league in rushing each year he played in the NFL except for 1962. Any rookie football card of a skill-position hall of fame player would be worth a lot, but there are other factors that make the 1958 Topps Jim Brown card even more sought after:

Design: The front of the 1968 Topps Jim Brown rookie card (#62) is a vertical layout and is arguably one of the most recognizable football cards ever made. It has a white border with a dark rectangle and an oval shaped photo of Jim Brown. In the photo, a helmet-less Jim Brown is carrying a football in a pose that is reminanacent of the Heisman trophy pose. His name (written on the card as “Jimmy”) as at the bottom of the card in brightly colored letters. Just below his name is his position “fullback” and team name “Cleveland Browns.” It’s worth noting that Jim was a fullback, but in his era fullbacks often carried the football significantly more than in modern times.

The back of the 1958 Jim Brown rookie card (#92) has a horizontal layout and is split down the middle into two sides. The left top has the card number and his name. Below his name you’ll find Jim Brown’s position, team college, size and age. The card features a short paragraph about Jim’s college career and rookie season. It also has stats from his 1958 season when he rushed for 942 yards and 9 touchdowns.

The top right side of the card reads “Football Fun” and has a large square that collectors can scratch off with a coin for a “magic answer.” The question reads, “What is the nickname of N. Carolina U.?” As mentioned above, this is one of the factors that decreases the population of Jim Brown rookie cards in perfect condition.

An All-American and all-around letterman at Syracuse, Jimmy kept grabbing new honors last season as the NFL’s outstanding rookie. All Jimmy did was lead the league in yards gained and TD’s as well as to pace the browns to the title.

Keep in mind that prices fluctuate. While PSA is a great way to find out the value of a card, we recommend going to eBay to see what cards are currently selling for on the world’s most popular auction site. Click here to view current auctions for the 1958 Topps Jim Brown Rookie card.

The 1958 Topps Jim Brown rookie card (#62) card is the only card in the hobby that is widely considered a Jim Brown Rookie. It’s not uncommon for a player to only have one Rookie card in this era, but there are a few other cards that warrant discussion in this post.

The 1958 Cleveland Browns card #9 isn’t considered a Jim Brown rookie, but it is his rookie year and Jim is in the photo. If you want to add this card to your collection, it shouldn’t set you back too much. And if you’re wondering if Jim Brown’s name is on the back of it, it isn’t. This card doesn’t have team roster information, but instead just has a paragraph about the Browns.

The 1959 Topps Jim Brown card #10 is the only other Brown card of the 1950s. This is Jim Brown’s 2nd year card and it features a photo of him starring off into the distance. It lists his position as “Fullback”, just like his rookie card does. This isn’t a rookie card, but it can be found in top-tier condition for a lot cheaper and still makes a very nice addition to a collection.

Most football historians consider Jim Brown to be the greatest running back in NFL history. He retired when he was only 29 years old after he had just led the league in rushing yards (1,544) and touchdowns (17). Jim Brown only played nine seasons in the NFL, but he lead the league in rushing yards in every season he played but one. At the time of his retirement he was the leading rusher in NFL history, a record he held until it was broken by Walter Payton in 1984. Walter Payton had the advantage of playing mostly 16-game seasons, while Jim Brown set his record playing seasons that only had 12 or 14 games.

Jim Brown walked away from football in 1965 while he was still at the top of his game. It’s very likely that he could have continues playing at a high level for several more years, but his strained relationship with Browns ownership and his budding movie career was enough to convince him to retire. Here are some of Jim Brown’s career accomplishments:

Get a Jim Brown Rookie for Your Collection

Do you want to own a 1958 Topps Jim Brown Rookie (#62)? If so, we recommend starting your search on eBay – the world’s #1 card trading place. Even if you’re not planning to buy one just yet, it’s fun to look at all the great cards currently for sale.

Amazon.com is the world largest ecommerce market place. They have Jim Brown books, memorabilia, and so much more. See what you can find today.